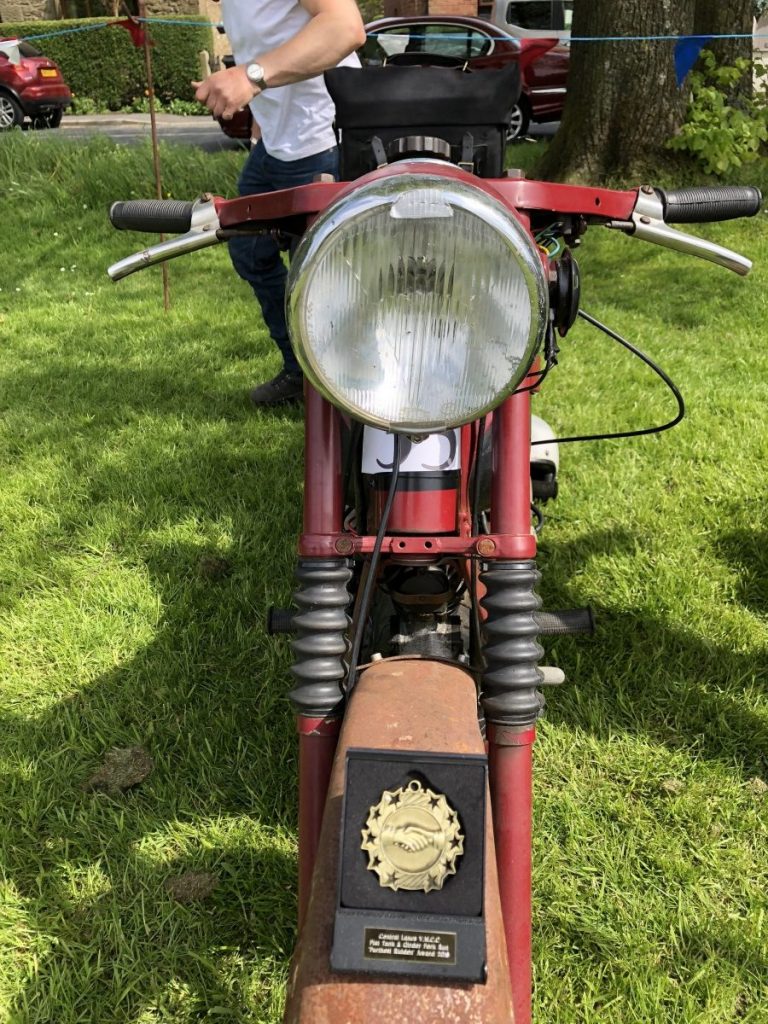 The story of the Nimbus told in a previous Happen post – https://hebtro.co/2018/04/25/the-nimbus/ – is now entering a new chapter. Once a pile of junk with potential, the bike is now an award winning endurance machine. The Central Lancs Vintage Motor Cycle Club, Flat Tank & Girder Fork Run “Furthest Ridden” Award 2018 is now mine. 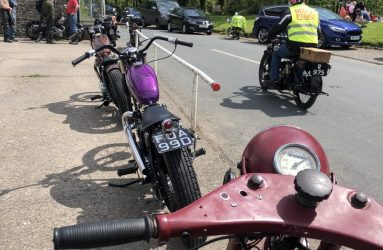 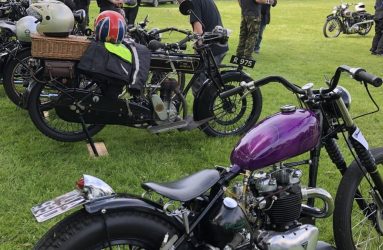 Bikes are much better enjoyed by being ridden than by being hidden. These machines, some of them nearly 100 years old, are kept running and on the road by enthusiastic and resourceful people in sheds. Forty five vintage, classic and custom machines took off with vigour, around a 50 mile route of fabulously scenic back roads in the Trough of Bowland. Lovely Lancashire came up trumps with blue skies and sunshine, majestic hills, valleys and forest. 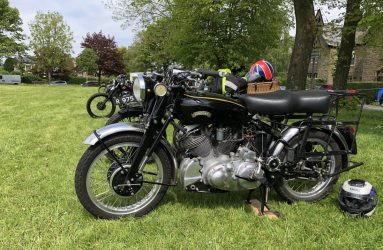 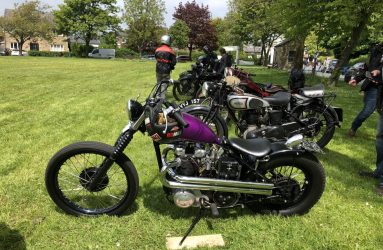 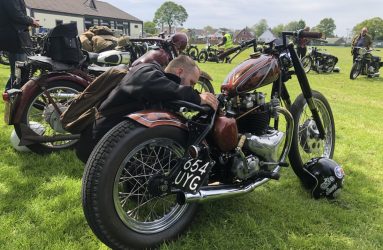 A favourite bike at the event was this Rudge Four. British made to last in 1926, it’s a 500cc single cylinder engined bike with features very advanced for its time: a four speed gearbox and four valves at the cylinder. In 2018 on the backroads of Lancashire it was being ridden two up. The rider wasn’t holding back, despite the pathetic looking rim brakes, and was overtaking the pack to then sit at junctions to show the rest of us the way. He was thrilling to follow over the twists, turns, humps and bumps of Blaze Moss into Dunsop Bridge. The Nimbus was running flat out, using all of its meagre 22bhp, to keep with a spirited group of rigid framed bikes from BSA, Norton, Triumph and the Rudge. By today’s standards we were not fast, several modern bikes blasted past us, but while they would be constantly holding back on the tight lanes, we were getting closer to the edge of performance and handling. 60mph on an ancient death trap with rubbish brakes can be quite a thrill. Added to this is the nervous worry in the background that you might have a mechanical and be stuck in the middle of nowhere. 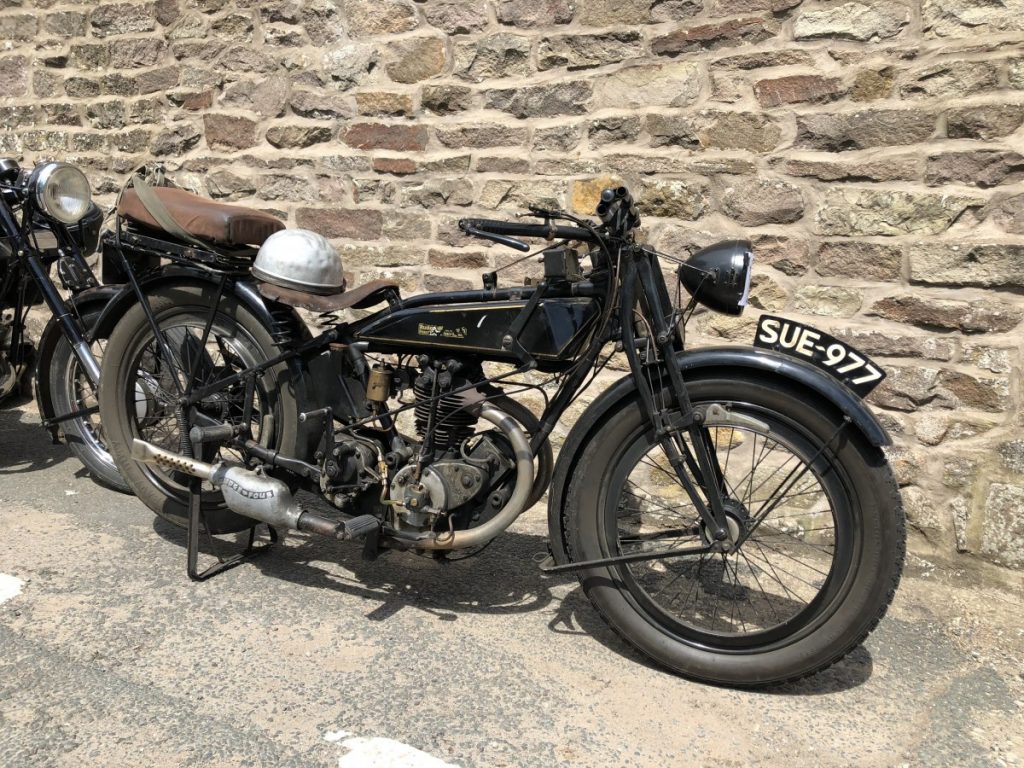 HebTroCo 1485 Field Jacket and first sample Moto Bag were put to good use. Really liking this bag and looking forward to develop the design further over a summer of riding and touring. 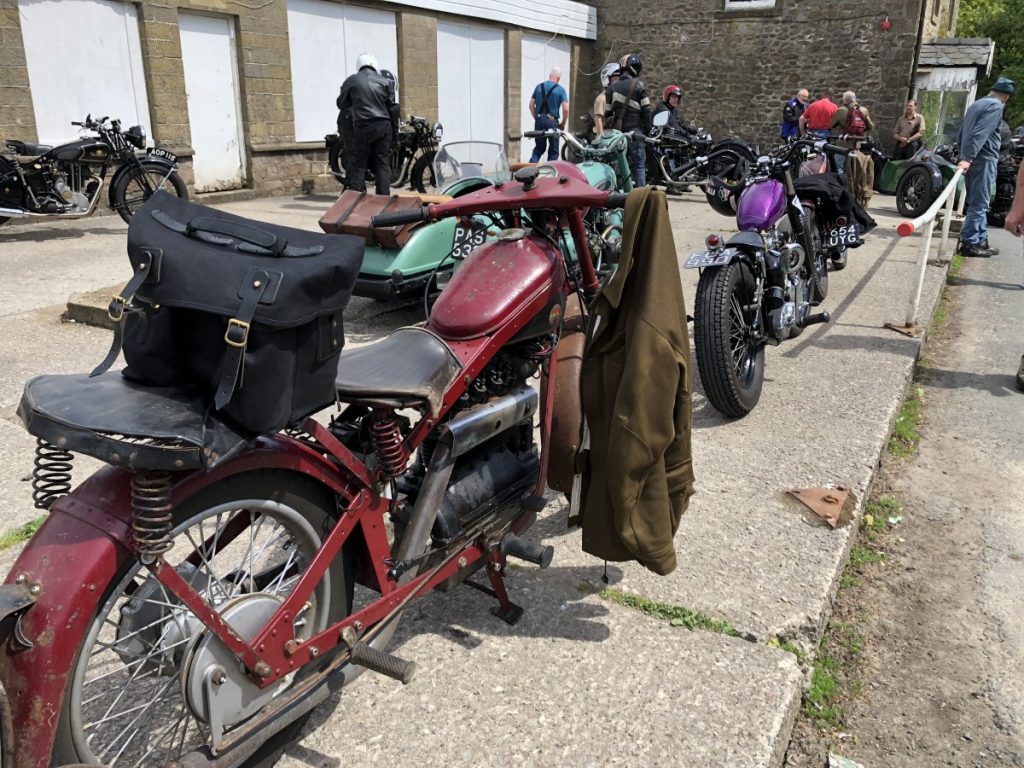 Back to the village hall in Goosnargh we feasted on pie, peas and gravy for £2.80. The pies were proper pies and not just stew with a lid on. When it got to prize giving time, it turned out that riding over from Yorkshire the Nimbus, clocking up 50 miles had travelled the furthest under its own steam to get to the event. 150 miles in total for the day and we didn’t break down. Cheers to everyone for being so welcoming and for sharing the good times on two wheels.